Currently, we are using Tier 1 Jolywood N-Type solar panels when installing on Commercial properties as they last longer, considered the best bang for buck panel with a 15-year product warranty.

Ever since our humble beginnings back in 2012 we have always managed to install a good amount of solar systems for commercial clients. With the price of Solar systems coming down more and more, as expected we are seeing a big increase in businesses wanting commercial solar systems installed in Brisbane. We are a longstanding solar company in Brisbane with more than enough runs on the board. 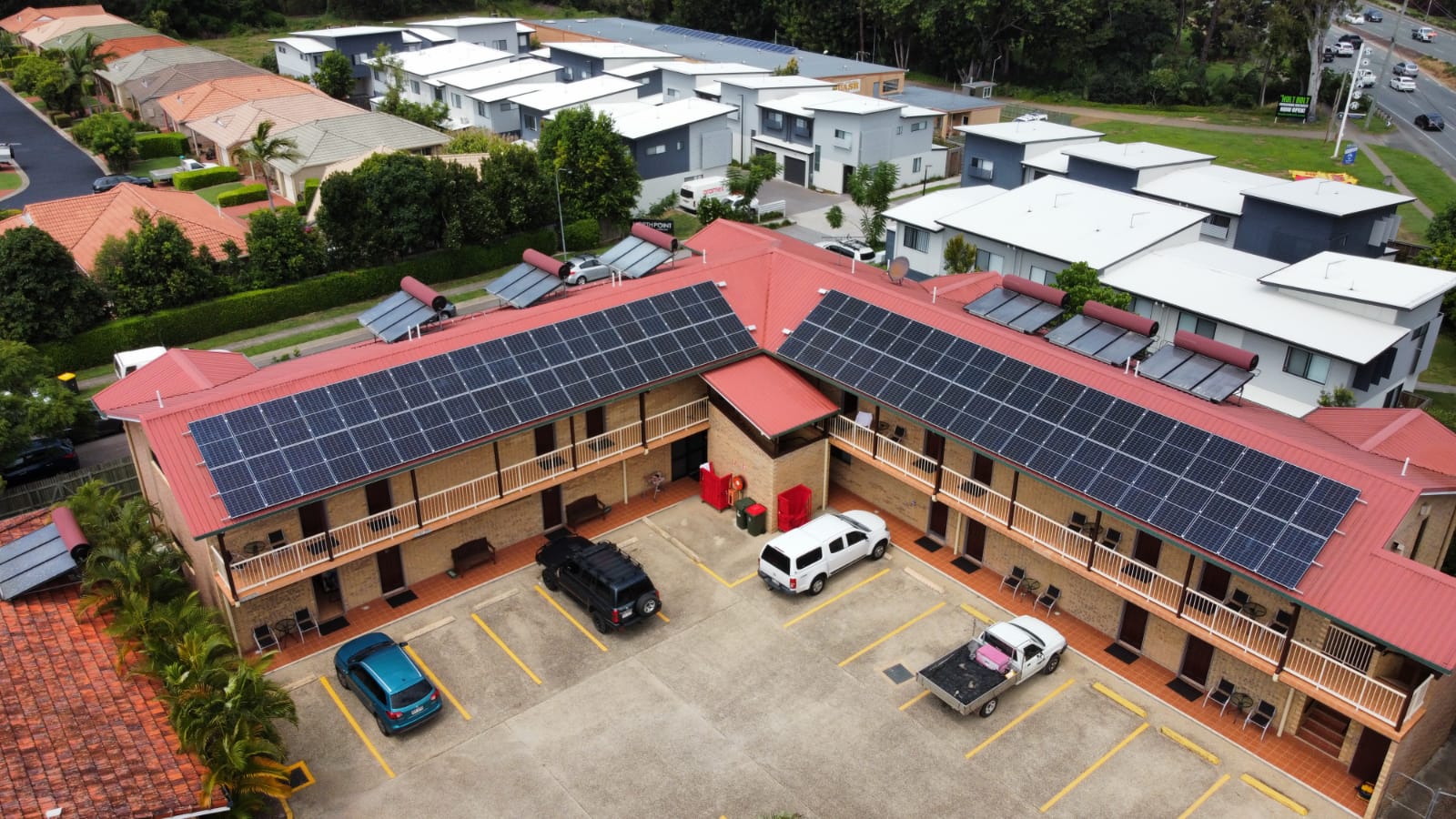 Commercial Solar systems installed in Brisbane are priced at around $1 per kw. Similar to residential pricing, but a little bit more as the jobs are a bit more involved with 3 phase power and the need and demand to satisfy the commercial solar requirements at Energex. The price of a commercial solar system gets the cheapest at around the 40kw size, and then the price per watt starts getting more expensive as the system qualifications increase. Systems above 40kw will need engineering certificates, more stringent commercial energy rules to adhere too as well. It really is very involved when installing 100kw solar systems and above.

The solar systems are made up of solar panels and solar inverters that are in similar character to our residential solar systems we have on offer.

We work closely with the team at Solaris Finance. Between Qld Solar & Lighting and Solaris we have formulated a system that makes it quite easy for the customer to ‘just get solar sorted and put on the roof by replacing the electricity bill with a smaller finance bill’. Commercial solar customers are often on the hunt for information on how to get a considerable amount commercial solar panels on their roof, enough to offset their businesses electricity bill, but unsure of how to do it without outlaying such a large amount of capital.

Many business owners still do not know that the commercial solar finance bill, and paying that off over a few years is 99% cheaper than paying the electricity bill as it is. This is exactly the reason why people put solar on their businesses – to give their business more cashflow! (A solar system that they own outright at the end of the finance loan is another plus too!)

Did you know there are more benefits of installaing a commercial solar system on your businesses roof than just saving money on the electricity bill? You can also hit up your accountant to ask how to take advantage of the various tax benefits of purchasing a solar system for your business! The Queensland Government website lists the current solar programs for Brisbane businesses they have on offer that can help you immensely.

We believe that Origin and possibly a few other retailers are paying Brisbane commercial solar system customers up to 11c Feed-in for every kilowatt exported to the grid! That’s an insane amount per kw, and especially given, that with over 80% of commercial premises we install on, the businesses are not in operation on a weekend to use the solar energy that the solar system is producing. This means that they are selling all the power they are producing in excess, really helping the business get a decent return of investment on their commercial solar system in Brisbane.

What are Commercial Solar Panels?

Commercial solar panels are typically solar panels that are of the 72 cell variant, rather than the smaller 60-cell solar panels. Ultimately the solar panel that is recommended to be installed on your businesses roof is depending on the specific roof profile.