Reaching out to the sun: New York:

Renewable energy has always been a topic of debate in government setups and has apparently become the new trend for the United States politicians.

Some powerful politicians seem to now understand the imperativeness of saving beloved Mother Earth from degradation and erasing humanity’s carbon footprint from the face of this planet.

There are many big industrialists, having financial power, who are staunch advocates of fossil fuel and but the arguments in favor of alternative renewable sources like solar energy cannot be undermined. A lot of people think that this debate has been shut long back with the cause of converting to renewable energy being reduced to mere theory.

Though the major industrialists like the Koch brothers would love to have this cause permanently dropped, we have now highly reputed people who are trying to shift the focus back to this subject of such grave importance. One of these personas being, Andrew Cuomo, the current Governor of New York. For those less aware of the political scenario, he is a Democratic who happens to be the 56th governor and is rumored for Presidential candidacy. 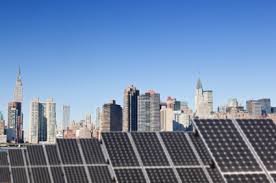 He certainly has a strong background considering his descent from a former governor of New York, Mario Cuomo. He also worked as a part of Bill Clinton’s administration and though he might have to queue up after Hillary to be selected as the presidential candidate, he has created a flawlessly dignified image for himself. His former spouse happened to be Kerry Kennedy but that marriage tragically (given his governmental line of profession) ended in divorce.

What has jaws dropping though is Mr. Cuomo’s solar power initiative. Recently the governor declared a $1 Billion extension to his 2012 NY- solar project. The program aims at installing three thousand MW of solar powered energy across the state.

An article from Think Progress has quoted the Natural Resources Defense Council. The Council has given statistics that say that greenhouse gases will be reduced by almost 2.3 million tons annually. This figure is arrived at by calculating that almost 4, 65,000 houses will be powered by these solar energy installations.

Employment generation in this sector will initially be as much as thirteen thousand jobs.

As a demonstration, 5000 state aided schools will be used for this project. Another interesting aspect is the Solar Governor’s plan to sponsor and encourage micro grids.

The NRDC has mentioned the positive effects of this scheme. They are of the opinion that a brand new market for solar power has been successfully created while also effectively reducing costs and using modern technology.

Cuomo has become the brand ambassador for the ones supporting alternate energy. His fan-following is quite optimistic that if he does decide to run for President or even lands a position higher up the ladder, their cause will soon become a global one.

It is true that this is a major topic of discussion amongst the progressive thinkers of this age but with someone as influential as Mr. Cuomo supporting the movement for using non-exhaustive sources of energy, the debate has a chance of being universally re-visited and maybe the day when most countries will be solar-powered isn’t  that far away after all.