We’ve seen some marvellous advancement in the field of renewable energy, especially solar power. New discoveries in the photovoltaics have made solar energy available to buildings throw innovative window panels. The concept of mini panels has gained momentum and become the latest trend in the field. The use of this new technology is not restrictive to brick and mortar structures but has also entered the world of automobiles.

Yes that’s right! You might in the near future be able to drive around in your sedan powered by the sun itself. In a brave new step to go green, the company has come up with the new C-MAX Solar Energi; a sci-tech version of its original everyday sedan which boasts of a roof that can allow solar energy to power up to seventy-five  per cent of an average car-user’s trips!

The panels on the roof are conjoined to a concentrated Fresnel lens and this system will replace your original car roof. An amazing Hollywood feature of this car is that it will automatically move slightly forward or backwards when parked, to adjust the focus of the lens and enable efficiency.

Ford is pretty excited about its new release and is optimistic that it will be able to use the technology on all its current models. If this does in fact work out, there’d be tough competition for the company’s rivals not only in the American but also in the Australian markets. The Aussies have always had a hard time choosing between Holden and Ford and there’s an ancient rivalry that exists between these two brands.

Recently the situation for Holden has been deteriorating in the Oz land anyway since it decided to stop manufacturing in the country and left many native works stranded. Though there has been heavy advertising to maintain its repute, with the new technology kicking in from Ford, it is really a matter of time before the solar powered motor-vehicles take over the streets. 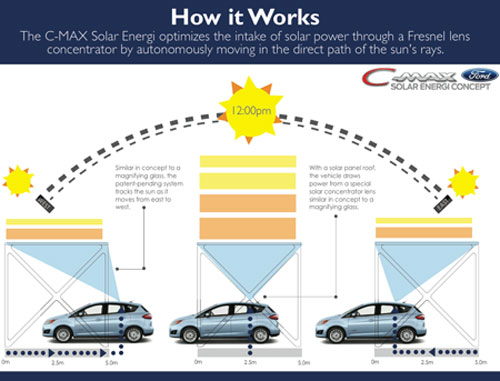 Holden has tried really hard to show its sensitivity towards Australians and has been working hard to erase the negativity that has started getting associated with its brand image. Timing however has given the edge to Ford who has opened up a whole new product market for itself globally.

A lot of people from the company as well as other experts have been calculating and they are of the opinion that savings running this novel category of cars will be huge. Ford has estimated that the costs as compared to fossil fuel based automobiles will be way less since the fuel consumption will be cut into half!

Experts have said that the greenhouse gas emissions will reduce by one billion metric tons in the United States if all light duty vehicles adapt to this method. Not only is this plan eco-friendly but also cost-effective. It sure seems like a win-win situation. We have to wait and see if the promises are delivered.

How much is a 5kw solar system in Brisbane in September, 2013?