BYE_BYE BOSCH, YOU SHALL BE MISSED

The clean energy movement has gained momentum globally over the last decade. The need for making the switch from polluting fossil fuels to eco-friendly renewable energy sources has never been felt more. Recently the Pacific nations had a grand energy summit sponsored by institutions like the World Bank, for the sole purpose of addressing this issue.

Among the available sources of renewable energy, solar power has been widely accepted since it is the easiest to harness. In the light of this changing scenario, the need for solar equipment has grown considerably and you’d think that the solar industry might be blooming, but alas, that is not the whole truth.

While there are some Chinese brands such as Yingli that are topping the charts and making enormous profits, its other European counterparts are not doing quite so well. With China’s ability to produce cost-effective solar panels and batteries, it is becoming hard for their competitors to survive in the market.

When you look at other countries that have been known to make advancements in the solar field, especially the European giants like Switzerland, France and Germany, it is hard to believe that they are having such a tough time keeping pace with the cheap yet efficient brands of the orient.

Many German brands are being driven to bankruptcy (no, not exaggerating), due to lack of monetary resources and the inability to carry on with debts. While many companies are trying to soldier on, some of them have made the tough decision to wind up the business. These companies are not just some newbies who couldn’t handle the heat, but in fact giant players.

Bosch is one such German top gun who decided to quit the race. In spite of noble intentions in the beginning, it couldn’t bear the brunt of continuing with its solar initiative. It was a company that had approximately $2 billion invested in it and yet the wiser brains behind the operation have decided to call it quits.

The money managers of the company do not see the solar divisions making any profits, at least not anytime in the near future. Bosch however is not the only German solar big gun facing this problem. Q-Cells too had a similar financial crisis some time ago and was on the verge of announcing insolvency when it was rescued by the Korean Hanwha Solar One.

BEWARE OF THE FAKERS

This just goes to show that there are a very limited number of genuine and authentic German manufactured solar panels available on the market. In case you’re planning to buy and install one of the fantastic, produced in Deutschland model of solar panels in your home, you might want to do a thorough research and identify the good stuff. 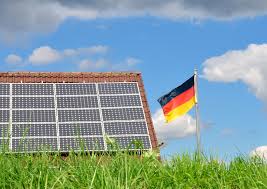 Like any other genre of products, there is a black market for solar panels as well and this includes the German market. A lot of brands sound German but are actually low quality stuff put together in a shanty somewhere. So beware before you fall prey to one of these misbranding strategies, and all you solar fans, bid farewell to Bosch, who is no longer going to be with us.

The Incredible solar innovation by Ford