Bushfires and their sunny side up

The Australian continent has off lately witnessed one of the worst heat waves of all times. Unbearably hot and undoubtedly scary, these bushfires have upturned the burnt pages of the history of the continent regarding harsh heat waves. It has aroused deep concern too.

The situation has been characterised by soaring temperatures and indecently warm weather conditions. The heat waves seemed to have engulfed the continent from all directions, flowing from north to south and from east to west. It has vividly brought back into people’s memory, the fierce bushfires of 1967 when the former state to Tasmania had been ravaged all over. 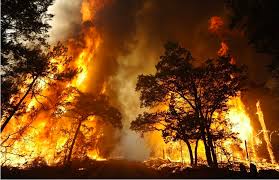 A huge loss of property and stock was witnessed during that time which now becomes afresh once again. Luckily any loss of life has not been confirmed as of now but all states and territories have been severely affected. The risk associated is that of an enormously great fire.

This is certainly too terrifying a thought to be imagined. Fortunately the brave fire authorities seem to bring some sort of relief in such kind of an emergency. They have showed immense heroism in saving life and property in such a crucial time.

In between all this heated hustle, emerges an apt spot to discuss climate change and renewable resources. There is enough evidence proving the role of conventional energy sources in these abrupt climatic changes all over the world. With time the argument has become more convincing to the people.

Although reputed scientists are not cent percent sure, but these dangerous heat waves are appearing to be a repercussion of the continued use of fossil fuels. Combustion of fossil fuels might be the trigger behind such accelerated changes in the climate. Renewable solar energy can come here to our rescue.

Unlikely to happen, the governments might once realize this situation and strive towards a sustainable option. One of the best ways of reacting to heat waves is to reduce carbon emissions and use solar energy as an efficient alternative. This surely calls for high involvement of the policy makers so that solar energy can be promoted as solution to these life-threatening heat waves.

Investments can be made in renewable projects keeping this in mind but the idea still remains quite far-fetched. However it may play a crucial role in putting an end to the increasing heat wave conditions which can eventually turn fatal as time passes by.

A chance can still be taken. The switch might produce late or no results at all. There has to be more work done on the feasibility of the concept as a means of replacing fossil fuels but the possibility is also high enough to work out something favourable.

The best part however is that even if the switch doesn’t play a significant role in stopping global temperatures from rising it will still remain renewable and in exhaustive. It will at least give us a safer and cleaner world to spend our lives in with our future generations in a zero pollution environment. So the heated bushfires have made us explore the sunny side of the continent even more.